Fall veggies – I could eat them all year long. Sometimes I think if everything contained butternut squash, the world would be a better place (the fact that trying to chop a butternut squash almost cost me a finger once doesn’t deter me). It just tastes like hearty sweet nutritious comforting perfection to me. So when we got butternut squash, acorn squash, and sweet potatoes in our CSA bag this week, I was really excited to get cooking! I came across this recipe for a vegetable tagine, which didn’t include acorn squash but I figured I could throw it in anyway. I also didn’t have a tagine, which is sort of a traditional Moroccan clay pot, or a dutch oven or terra cotta substitute, but I do have a beautiful Le Creuset french blue stoneware baking dish that my dad and stepmom got me for my birthday and I don’t get to use nearly enough. So I prepped the first part of the recipe in a pan and transferred it to the Le Creuset for the baking part, which seemed to work out just fine!

If you also don’t have a tagine, or something similar that can go from stovetop to oven, do this: Preheat the oven to 375. In a pan, saute one chopped onion in 2 tbsp olive oil until it turns golden. Then add 2 cloves of minced garlic, 1 tsp ground ginger, 1/8 tsp crushed saffron threads, and a pinch of cayenne pepper, and cook for another minutes. Then transfer this to your baking dish with 1 butternut squash, 2 sweet potatoes, and 1 acorn squash (chopped into cubes) or any ratio of these veggies you want (I personally would have gone with more butternut and less sweet potato if I did it again). You could also add carrots. Slowly stir in 2 cups of hot vegetable stock, top with a 1/2 cup of raisins, and drizzle with 1 tbsp of agave (or honey). Stick a cinnamon stick in the middle, cover and bake for an hour. Remove the cinnamon stick, sprinkle with cilantro leaves, serve on its own, with bread for dipping, or over brown rice or cous cous. Now I have to admit (and I LOVE cilantro), I was skeptical of how the cilantro would taste with this… but it was great! Such a nice flavor contrast. Definitely don’t skip it (if you tolerate cilantro). We ate it as a main course over brown rice (Lundberg, my favorite) with sauteed snap beans. Delish… 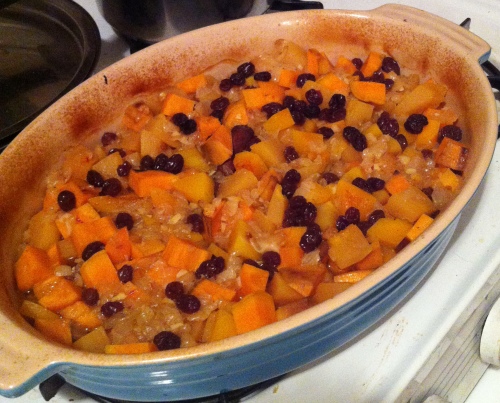 Squash and sweet potato tagine right out of the oven 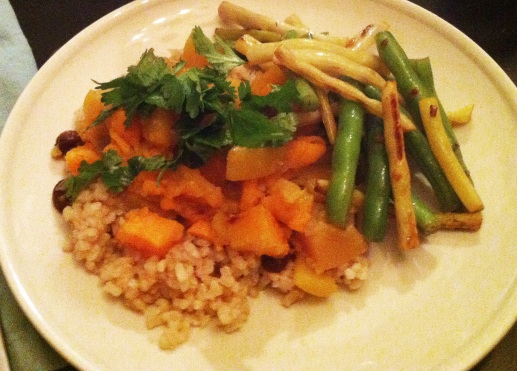 Caviar with a conscience

Check out my mom's eco-friendly caviar business - and maybe buy some!
Pointy Snout Caviar is made by hand from sustainably farmed White Sturgeon roe. It is chemical-free and honestly labeled for date of harvest and provenance.